5 Things to Consider When Choosing an Electric Scooter

5 Tips for Buying An Electric Scooter

Hoverboards Buying Guide – Everything You Need To Know

EBike vs Electric Scooter – Which One is Right For You?

Are Electric Scooters Safe? Don’t Get Injured Riding Yours

How Much Do Electric Scooters Cost in 2021

How Far Can An Electric Scooter Go On One Charge

You’ve probably heard or even come across electric bikes and electric scooters by now.
Both of these personal electric vehicles or rather PEVs (Personal Electric Vehicles) are often touted as the last mile vehicles that will allow commuters to travel short distances conveniently. In cities, they offer a complete commuting alternative to public transport.
But one PEV, you might not have heard of yet, is the electric unicycle or the EU.

The Electric Unicycles are odd-looking electric vehicles consisting of a single wheel that a rider straddles.  Like a hoverboard or Segway, they are operated through self-balance.

Though the Electric Unicycles are more like toys, they offer a serious transportation alternative.
But how do they compare to the electric scooters? Which between the two is better?

In our electric scooter vs electric unicycle article below, we will compare between these two means of transportation and see what alternative is probably best for you.

However, we will only compare the entry-level models, as probably those who need the high-end models most likely already know what they need.

Electric Scooters at a Glance

Electric scooters are exactly what they sound like; they’re popular PEV, and you've probably come across them.

The e-scooters are basically motorized versions of a scooter, and they come with an additional electric motor, controller, and battery for power.

These PEVs are designed with a handle for control and a large deck in the center on which the rider stands.

Though the electric scooter concept isn't new, it didn't gain popularity until recent years; in the past, there wasn't the need for scooters as there was less traffic, and the cities weren't crowded as they're today.

Electric Unicycle at a Glance

The electric unicycles, on the other hand, are a rare sight and not as popular as the electric scooters or any other PEV.

The electric unicycles are a bit more futuristic; they come with a single wheel with laps on either side upon which the rider stands.

To control the an Electric Unicycle, you need to lean either forward or backward to accelerate or decelerate.

As we had mentioned in the introduction, the EUs are much more like a Segway, except they’re way cheaper and cooler. 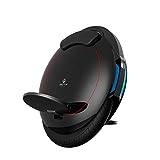 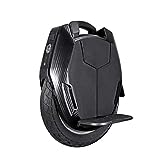 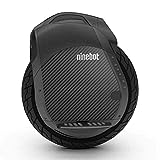 The riding experience on both models is vastly different for one obvious reason-the handlebars.

The scooter has handlebars, which, like most moving objects, gives better control, better stability, and better balancing, even on the bumps and dips on the road.

The electric unicycle, on the other hand, lacks handlebars, and the riders must rely entirely on using their body weight to steer.

All of this means the unicycle has a far steeper learning curve than the scooters.

See, to use a scooter, you simply have to hop onto it and start riding. If you can control the scooter when in motion, you can as well simply hop off the scooter to regain control or even come to an abrupt stop.

The same can’t be said for the unicycles.

The idea of taking both feet off the ground without having to hold onto something is unusual and will take time to get used to.

And as such, it alienates most people who struggle to balance or feel uncomfortable with such stunts.

Another difference between these two models is how easy it’s to hold balance.

We can all agree that with unicycles, it’s a challenge to keep balance, considering that you’ve nothing to hold onto.

With an electric bike, balance is easier to come by since both feet are anchored on the same platform, and you’ve something to hold onto.

Both of these PEVs are small, lightweight, and practical.

However, unicycles are 20% less heavy than the electric scooters, and while the difference is not huge, it means a lot if you’ve to carry the scooter for long distances.

On average, a unicycle weighs 15 pounds, while a scooter weighs anywhere between 20 to 25 pounds.

Though it’s possible to fold the scooters for storage, they still might prove harder to carry.

The unicycles, on the other hand, are quite minimalists, don’t need folding, and their circular shape saves on space.

When in use, the reverse is true; scooters have greater mobility. The balance offered by scooters makes it easier to tackle the corners, and the braking is more refined.

We shall look at these elements in the safety section.

The design difference plays a crucial role in the overall safety element.

Of course, like any other PEV, there’s a safety risk involved, and so, you should always be careful with either.

The electric scooter, however, is a safer option than the unicycle because it features handlebars that help you keep balance, and allow you to take sharp corners with ease.

The handlebars also feature brakes, which makes it easier to slow and stop in an emergency.

This is as opposed to the electric unicycles safety perspective it requires you to tilt your body either forward or backward to achieve control.

Are Electric Unicycles Safe or Dangerous? They Can Be Both Read More

To brake, for instance, you need to lean back, and because of the inertia, it can prove quite challenging, and in most cases, you'll realize that this form of braking is not so effective.

While some of the riders might prefer this form of traditional braking, it’s without a doubt a less safe method of braking.

Again, with the unicycles, there's a considerable lack of sideways maneuverability, which makes taking the sharp corners a challenging feat.

This category is a bit of a tossup, especially when you consider the speed and range.

The actual differences in the speed and range depend on the type of PEV you have.

For instance, it’s possible to find varying performance even in between the individual models.

Generally, however, scooters seem to have the upper hand in this category.

The average scooter speed, for instance, is between 15-20 mph, a contrast to the 8-15mph on the electric unicycles, though, as we had mentioned, it's still possible to find unicycles capable of doing 20 mph.

A similar scenario plays in the range: the unicycles have a lower range than that of the electric scooters. Either way, when comparing from a “last-mile” of view, both of them offer a decent range.

The acquisition cost for both models is comparable.

However, unicycles are a tad less costly than the scooters, and this is because of the smaller battery.

As you may already know, the battery normally takes up a large percentage of the cost.

Again, when you look at the maintenance costs, the unicycles consume less energy as they’re lighter than their equivalent electric scooters.

Even so, the electricity consumption is still insignificant.

Who is the Electric Scooter for?

Electric scooters are an ideal option for those new to the PEVs.

They’re much safer and have a less steep learning curve compared to the electric unicycles.

They also have an extended range and so an ideal option for commuting for long distances.

Their control and balance mechanism are also better, and so, they’re easier to use even in the crowded spots, without the risk of collisions or accidents.

Who is the Electric Unicycle For?

With these PEVs, it's easier to ride almost anywhere, and you can take them anywhere with you. For instance, they'll easily fit into your shopping cart, and you can even go with them into a restaurant.

Another thing is they’re more practical in the sense that they’ve larger pneumatic wheels, as opposed to the smaller wheels, so you can go through the light to medium trails with ease.

Finally, unicycles have legal access to anywhere that a bicycle can go.

The biggest drawback of these unicycles is the steep learning curve.

Between Electric Scooter and Electric Unicycle: What to Buy?

Well, I would say both models have their strong points and their drawbacks.

Generally, however, the scooters are suitable for the flat and tarmacked terrain, but if you need to take your adventure to the rugged terrain, a unicycle might be a great option.

Still, there're plenty of other factors to consider, and the suitability of either model will depend on the purpose of a PEV, your terrain, range, and much more.