Are Electric Unicycles Safe or Dangerous? They Can Be Both

Why is Onewheel so expensive? Top Alternatives

How Fast Does Electric Unicycle Go?

The two major factors that people consider when purchasing an electric unicycle is how fast it can go and how far.

The answer to how fast the electric unicycle goes is speculative since different brands will give you different answers.

And though speed is an important criterion when choosing an electric unicycle, it’s not the only factor to consider. If anything, I’m usually concerned more about the average speed as opposed to the maximum speed.

That said, for the sake of adrenaline lovers, we shall look at the highest possible speed that electric unicycles can achieve and some of the factors that affect the speed.

How fast does the electric unicycle go?

15 MPH is pretty high, especially for a beginner, but as you become a better rider, you might start itching for more speed.

Luckily, there are some outliers, and a few electric unicycle models can get you up to 30 miles per hour. In most countries, there’re laws governing the speed of PEVs (Personal Electric Vehicles).

However, in the north American marketplace, for instance, the regulations on the electric unicycle laws are not standardized as they vary from one state to state.

However, most of them require that the motor output exceed 500 W and that the electric unicycles cannot travel faster than 20 mph.

Of course, the definition of electric unicycle and whether a particular personal electric vehicle falls under the electric unicycle category varies from state to state, so you should check with the local transport authority.

Speed laws and regulations, notwithstanding, there’re other factors determining the speed of an electric unicycle and how fast it can go. Are Electric Unicycles Safe or Dangerous? They Can Be Both

Factors Determining the Speed of an Electric Unicycle

Size of the Wheel

Electric unicycles come in different heights, determined by the size of the wheel.

Normally, the electric unicycles are classified by the tire size, which ranges from size 12”, 14”, 16”, and 18”, though there’re models with bigger wheels.

Generally, the bigger the wheel, the more surface it covers when the wheel rotates.

Unfortunately, though bigger wheels translate to higher speeds, they’re more difficult to handle and suited for the experienced riders only.

Even flat surfaces will allow for better speeds compared to when riding on mountains or uneven and rugged surfaces.

On a flat and even surface, the electric unicycle has fewer distractions on the road, and so, it can easily achieve a maximum speed.

Not surprising, the heavier you are the more power you need to accelerate.

Now, assuming that all things are equal, the heavier riders exert more pressure on the motor, consequently resulting in a lesser speed on their electric unicycles than the relatively lightweight individuals.

Therefore, to attain the maximum speed on an electric unicycle, choose one that is rated for your weight, or even better, one with a higher weight capacity than your actual weight.

The motor output refers to the power rating of electric unicycle.

The proper thinking is that power translates to speed, which is entirely wrong.

Nonetheless, it still plays a crucial part in the speed of an electric unicycle.

After all, it determines how efficiently your electric unicycle can handle the extra weight or how it handles the rugged terrain, all of which are crucial elements affecting speed.

What is the electric unicycle top speed?

The highest recorded speed for an electric unicycle is 35 miles per hour, which is offered by the Gotway MSX.

There’re other noteworthy contenders for the top speed in electric unicycles, and they include:

What is the fastest electric unicycle?

It’s a high-performance unicycle that comes with a powerful 200W motor and a robust 1600Wh battery capacity.

The drivetrain of the Gotway MSX delivers an astounding speed upward of 50 km/hr and a massive range of 100 km.

It’s a popular option for those who are looking for high cruising speeds, long rides as well as Offroad trailing. What is the best electric unicycle for beginners?

Ideally, the best electric unicycle for beginners should have:

I recommend choosing an electric unicycle with smaller wheels because they're easy to maneuver, giving you greater control.

They also have a lower center of gravity, which makes mounting and dismounting a lot easier.

Wider tires provide more stability, and this, even if you ride on a bump or a crack, you’re less likely to get knocked off balance.

Finally, you need to pick a frills-free and inexpensive electric unicycle.

Remember, you're still new to riding, and the last thing you would want is to crash an expensive purchase, or even lose interest in the hobby, and you’re left counting losses. 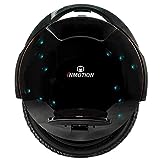 First time riding an electric unicycle: How hard can it be?! Like the regular vehicle, speed varies considerably with the PEV; some are slow, while others are fast.

Again, remember that speed is quite relative.

What you consider slow, is fast to another rider.

It all depends on your riding needs, temperament, and what speed you feel is safe for you.