48v vs 60v E-Bikes and E-Bike Batteries: Not All What You Think The battery is at the heart of the electric bike, but most potential e-bike buyers often overlook it when making the purchase decision. Therefore, it is no surprise that e-bike batteries are some of the most cited complaints among new e-bike owners in particular 48v vs 60v E-Bike batteries.

Such statements as, "I should have bought an e-bike with a better, bigger battery" is the order of the day when it fails to live up to expectations. 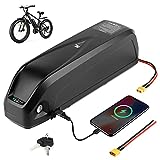 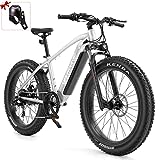 The range, speed, and power you can expect from the e-bike all depend on the battery's size; have this at your fingertips.

The most common e-bikes are the 48v and the 60v e-bikes because of their modest hill-climbing power and speed. We discuss a few issues regarding the 48v and 60v e-bike batteries below.

In most cases, the motor is not what matters, but the controllers' voltage limit - where the primary focus should be - with higher voltage batteries. As a rule of thumb, avoid subjecting electrical components to more than the voltage they are rated, unless you want to cook them, of course. You will observe that most of the 48v e-bikes with LCD display have a limit of 60v, and the controller maximum is 63v. If both the controller and the battery are massive, then the chances of flying the motor increase exponentially.

The controller should have a current limit and be in a position to comfortably handle the pack's peak voltage. You need to program the controller to the new 60v parameters, or other ratings in some models.

That said, what is the maximum charge of the 60v pack? What are the specs of the pack? The answer to these questions will help determine the pack’s compatibility with the setup you have on your hands.

Otherwise, you will need a new controller. To play is safer, you may bring in a new motor and controller rated at around 72v, that is, if you want to keep using a 60v dc battery. There's no danger of cooking the components if you run them at a lower voltage.

But you will still need to be sure the lower voltage is right for the control or microprocessor circuits - not usually a problem with modern e-bikes, but don't assume it. Check!

The main goal of using a 60v battery is in most cases, to increase the speed.

One of the emerging sayings in the gearhead community is "how fast you want your ride depends on how much you are willing to spend," and the truth in it is quite mind-boggling. Loosen the purse strings if you want speed and reliability as the core ingredients of your e-bike.

But is it possible to make it go faster? Please note that the motor spins faster with higher voltage before we can explore this question.

Typically, there is a workaround to increase the speed, but it depends on the model. For instance, you can change the hub motor to push the speeds closer to 30 mph or choose an e-bike with a programmable controller to exceed the 750w limit by most states.

Other ingenious methods include delaying the throttle or choking back the power for less speed. There's also the option to use the USB to change it back.

When it comes to speed, the motor and the gearing system's design are more critical than wattage. And of course, you can make the 48v e-bike go faster by switching off pedal-assist when riding downhill. Here, you can go as fast as you want. A 60v e-bike has a typical cruising speed of 42 mph, but some models can reach speeds of 45 mph on flat ground. Factors such as the drag coefficient and windage come into play in determining the top speed of your 60v e-bike.

If the distance is the primary goal, going slower will have large dividends.  A decrease in speed consequently reduces the drag energy by a fraction. For example, a 10% decrease in speed produces a 27% reduction in energy needs (100 x (1- 0.9^3).

It is much wiser to cruise at lower speeds with your 60v e-bike than taking full advantage of its speed potential. But if you are commuting over a shorter distance, you can go as fast as the e-bike allows you.

Throwing in more cells to the pack to increase speed seems to be the trend, but that is if the motor limit allows. Otherwise, the upgraded voltage can cause trouble with charging, among other issues.

For riders that badly need better range and speed than the one provided by the 60v e-bike, they can choose the safer option of purchasing a new high-end model. Currently, there is a lot of battery innovation and progress, and getting a unit that cruises at better speeds and range is not difficult.

The speed difference between the 60v and the 48v e-bike is only around 3 mph, according to the e-bike simulator. That is not much difference for the trouble of conversion to the higher voltage. Well, at least according to some people.

How Long Do Electric Bikes Last

But you may be wondering why the speeds do not increase quite significantly when you upgrade from 48v to 60v.

With an increase in speed, the percentage of the e-bike energy that goes into combating wind resistance also increases. But if you can figure out how to reduce the drag coefficient, you can achieve better speeds with the 60v than the 48v e-bike. You may also successfully achieve improved range with the extra voltage.

48v is the most common in e-bikes based on its optimal power to price ratio, but the 60v and the 72v are expected to grow because of the preference on speed.

There are, however, various ways to increase speed for your 60v or 48v e-bike, such as pumping up your tires. Pumped-up tires reduce rolling resistance and boost your speeds on smooth roads. But on the downside, the harder tires will not cushion you against road irregularities.

You will probably feel every bump, which can be quite uncomfortable for folks with joint and muscle problems. 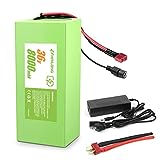 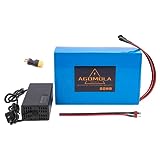 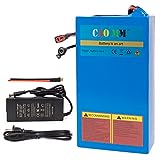 Converting your 48v e-bike to 60v is not rocket science, and anyone can do it. You need a 60v battery pack and a new controller for the upgraded voltage.

Of course, the battery will eat into your savings a bit more than the controller, but the investment may be worth it. Some riders may choose to only upgrade the battery pack and leave everything else the way it is, hoping the extra battery voltage will provide additional power for more speeds, but that is sometimes not the case. The null efforts usually come as a surprise to them, but there's an explanation.

Both the controller and the motor must be rated for speed and the extra current. In such a null-efforts scenario, the motor is likely rated for 48v, and pushing it beyond this would not produce results, or in the worst-case scenario, burn it out. Some factory controllers can accept small amounts of overvolting, but not too much.

Check the voltage rating of the controller, usually stated on the capacitors. If you are not comfortable checking the capacitors for controller rating, there's always the manufacturer's website. Don't try swapping out the battery without confirming the rating.

Remember that there is a clear and present danger of adding battery packs to the e-bike, especially when you are not sure of what you are doing. There is a reasonable possibility of destroying various e-bike components such as the controller and the battery pack.

The 'vent in flame' is rather a not very charming characteristic of the lithium-ion cells, triggered by a range of unlikely factors. If there is sufficient energy, the battery can detonate almost a similar way to a hand grenade, injuring you and others. Therefore, be sure of what you are doing, not shooting in the dark and hoping to hit the bull’s-eye.

Remember that converting a brand-name e-bike may be a little tough because of the custom components they use. But it's not impossible.

Adding a second 48v battery pack may have almost the same results as upgrading to 60v. Each of the 48v batteries will only need to supply half of the current to get the full amount the controller demands, with the benefit of zero snags.

Also, upgrading to a motor with a higher RPM is another option, especially for hub motors. Specifically, look for a motor with a better RPM or KV. But still, the upgraded hub motor may not be sufficient for the jump to 60v. Even though upgrading the hub motor will add around 10 mph to the speed, it should be part of the conversion.